Mossman Artist Brings The Bold And The Beautiful To Carnivale

His exhibition Folk Stories is shaping up as one of the must-sees of this year’s Port Douglas Carnivale.

The former Londoner, current Mossmaner takes inspiration from his surroundings through a unique lens.

He has translated his former life as an art director for the BBC and independent British films into his present works, using his cinematic eye to remake everyday scenes round far north Queensland.

His hyper-reality works give a 21st century pop to the images that are often embedded in the last millennium. Ellis has described his paintings as like film stills.

“[They] illustrate a small part of a bigger picture where story, character and scenery merge to create a portrait of life in these ‘somewhere-else’ places.”

His paintings rediscover the appeal of country towns, which may have a faded veneer but have a charm and character he loves – going about their business indifferent to the “politics and progress of a modern, edgy, sometimes dangerous world”.

They are painted into big, bright works – both colourful and full of light and often with a twist.

Ellis works in digital and video media as well as painting and has a Masters in Fine Arts. His works have been exhibited in Brisbane, Cairns and the Atherton Tablelands.

Douglas Shire mayor Michael Kerr said the exhibition will be a double treat for attendees;

“Tim Ellis’ paintings are quirky and joyful and locals might also recognise one or two locations and subjects!

“It’s fantastic to have a Mossman artist exhibiting at Carnivale who loves depicting the area in such an original and vibrant manner.”

Tim Ellis’ Folk Stories exhibition at Sugar Wharf will be officially opened on May 20 at 5pm. The launch is a free event. It runs until May 23. 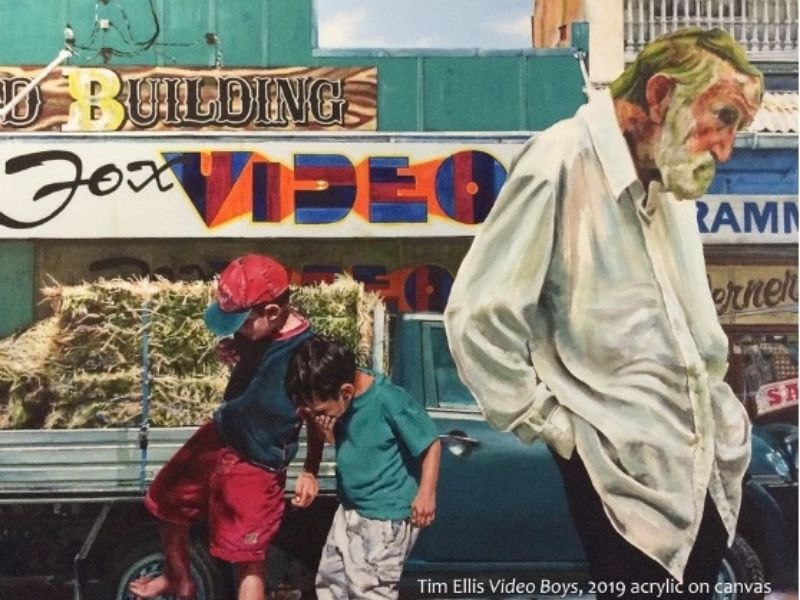