AN EARLY bird discount will be available for Douglas Shire ratepayers who pay their general rates on time.

Council resolved to restrict the increase to general rates and utilities charges to 2.2%, in line with increases to the Consumer Price Index (CPI).

General rates will be reduced by 1.2% if the bill is paid before the due date, keeping an estimated $140,000 in the pockets of ratepayers.

Douglas Shire Mayor Michael Kerr said his first budget was a difficult one that featured an increased focus on roads, public spaces and water security.

“Council must get back to basics, invest in critical infrastructure and get on with the jobs that our ratepayers expect and want us to do,” he said.

“The community will see a renewed focus on the fundamentals with $12.5 million dedicated to civil projects such as to roads, footpaths and drains, and $3.34 million pumped into projects to improve our water security.

“You can also expect to see more workers on the ground with extra funds being allocated for outdoor crews to get the important tasks done.”

Council estimates about $620,000 in pensioner rate subsidies and other rate discounts will delivered next financial year. 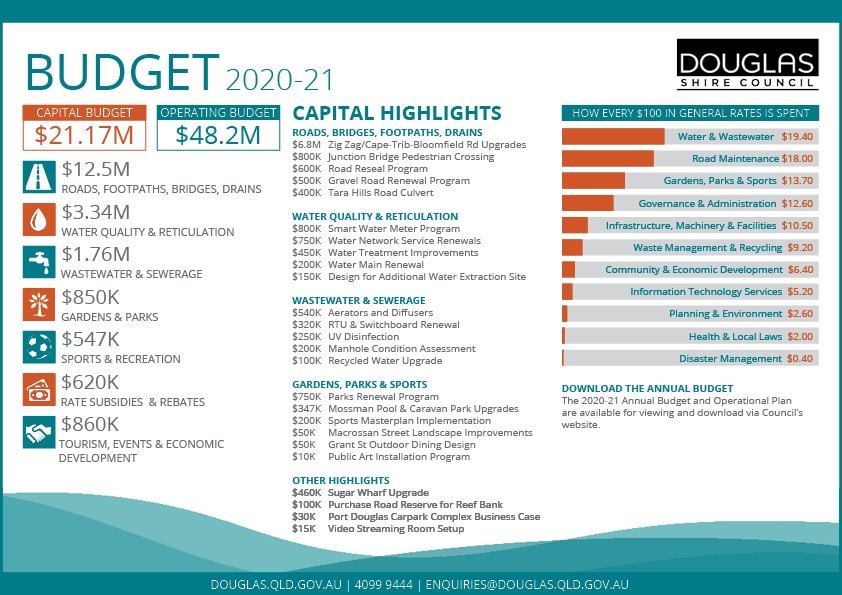 Across the next 12 months, Council will spend $18.7 million on materials and services, providing more opportunities for local contractors and suppliers.

Local business are encouraged to register at Vendor Panel to get notifications of council quotes and tenders.

In order to offer the required level of service to ratepayers, along with the impact of the COVID-19 pandemic, Council’s financial position is expected to be pushed back to a $3.7 million operating deficit.

Mayor Kerr said Council must have a focus on growing its rate base and finding alternative revenue streams to ensure ratepayers do not wear the burden for the next few years.

“As one of the hardest hit regions by COVID-19, we are facing uncharted territory and we are committed to getting the best results for this shire.

“Whilst no one wants rises, this is a responsible budget that keeps Council financially viable without imposing any unreasonable increases.

“I am determined to continue exploring revenue-raising opportunities and this financial year will investigate how rates are calculated across the shire to bring back fairness and balance to all ratepayers.”