Council steams up pressure on weeds

COUNCIL is full steam ahead on its move to reduce its reliance on herbicides in Douglas Shire through its year-round steam weeding program. 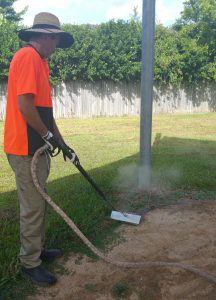 Playgrounds continue to be targeted under the environmentally-responsible program that received $40,000 backing under the Douglas Shire Council’s 2018/19 Annual Budget.

Mayor Julia Leu said Council is committed to reducing its reliance on the herbicide glyphosate, which was recently at the centre of a $300 million court case in the US.
“We are constantly looking at ways to minimise the usage of herbicides and pesticides,” she said.
“Council’s efforts to shift our weed management focus away from chemicals can be seen in our decision to ban glyphosate north of the Daintree River and at community areas such as playgrounds, parks, BBQ areas and sports grounds.
“We are proud custodians of pristine natural assets and will continue to give vast consideration to alternative options to reduce or eliminate herbicide usage in the long term.”

Council uses slashing and steam weeding to drive this shift away from chemicals.
The steam-weeding technology is specially designed to create super-heated water and wet steam that destroys weeds on contact.
Weed steaming reduces chemicals that enter Douglas Shire waterways as run-off and are potentially harmful to people.

“Council is very concerned about the use of glyphosate and is committed to eliminating products that contain it,” Mayor Leu said.
“We spear-headed a successful steam weeding trial and have been using the technique and slashing for several years now.”