Little Falls Creek is the collection point for a large catchment area, which means it was inundated by floodwater several times each year. To reduce the instances of flooding, Council constructed a bridge over the creek.

The project commenced in April this year and was completed 7 August 2020. The project was 100% funded by the Queensland Government’s Works for Queensland program.  All that’s left to do is choose a name. Scroll down to Community Consultation to see the four names which have been suggested.

The new bridge at Whyanbeel is now complete and open for traffic. While the area immediately surrounding the bridge is devoid of greenery, unlike the surrounding, lush valley, contractors have planted out the creek banks with over 160 plants including Lomandra hystrix and other small grass species.

Balance of work includes work on road drainage and bridge approaches. The project is scheduled for completion August 13, 2020

UPDATE: The temporary road closure as indicated below has been cancelled. Council will advise a date for the rescheduled works in the near future.

To enable the installation of the new bridge deck, the temporary side track currently in place at Whyanbeel Causeway will be closed to all vehicles and pedestrians from 9am to 1pm on Wednesday, 3 June, 2020.

During this time, eight girders, each 18.5 metres in length, will be lifted into place requiring heavy machinery, cranes and excess equipment on site. Read the road closure notice, here.

Motorists are asked  to take care when travelling near the Whyanbeel Causeway project. The existing causeway and temporary bypass were inundated by minor flood waters due to recent rainfall overnight. Please remember if its flooded forget it. The temporary bypass is now accessible to the public. The contractor will be constantly monitoring the weather, stream flows and the condition of the temporary bypass.

Kenmac Constructions started works on Monday 20 April 2020. A temporary side track immediately upstream of the existing bridge has been installed to provide access for residents and contractors during construction of the new bridge. This side track will be completely removed once the new bridge has been completed, and the area restored to original natural conditions.

Council released an invitation to tender for the construction works, comprising of the supply and installation of prestressed concrete deck (PSC) with construction of two abutments and corresponding roadway approaches.

Council released the 2019-2020 Annual Budget, announcing it will spend $600,000 to upgrade the causeway, which is a known safety hazard during wet weather. Read full announcement, here. 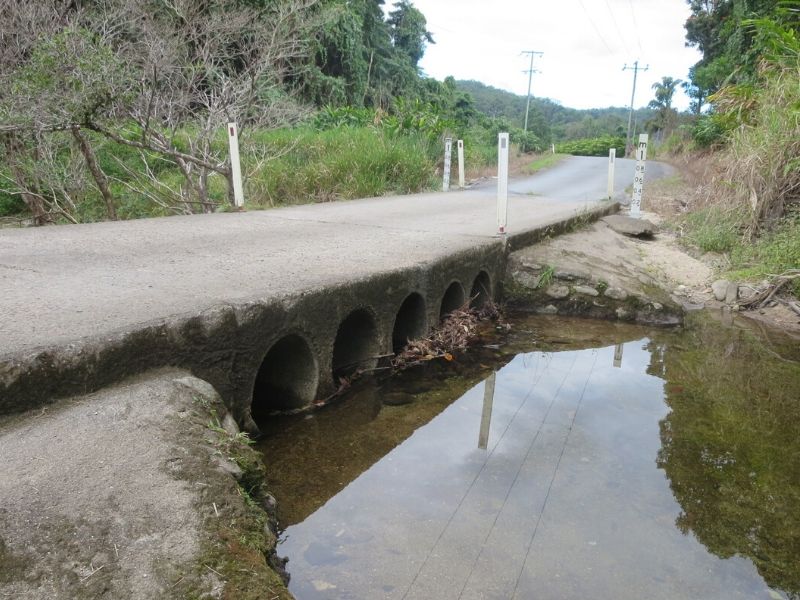 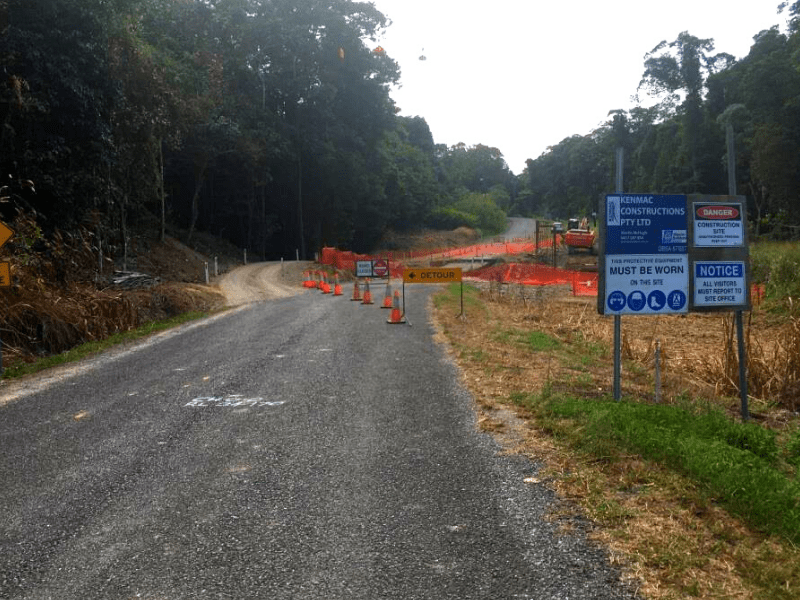 The new single lane bridge over Little Falls Creek on Whyanbeel Road has been completed. Four names for the bridge have been suggested:

The background to each of the names is below. Post your comments on our Facebook or send an email to gaye.scott@douglas.qld.gov.au. Council will be deciding on the name at the Council meeting planned for 28 August, 2020 so be sure to send in your thoughts soon.

“Fan palms are abundant on the properties behind the bridge. It is a very pretty palm and I am not aware of another bridge in this area with this name. We would be happy to donate a couple of fan palms from our property if the council would intend to plant some more around the bridge.”

“Devil’s Thumb, also known as Manjal Jimalji by Eastern Kuku Yalanji, is a mountain located near Mossman. It rises 1,065 metres above sea level. The creek which runs under the new bridge in Whyanbeel, travels from Manjal Jimalji. ”

“At the opening of meetings and gatherings Traditional Owners and local Elders are often acknowledged in word. I see this as an opportunity to do something tangible. Something tangible to correct a history that has seen them largely marginalised With (50,000 plus) years of history and connection to this land I think that this is the very least that we can do as a community.”

“It’s always been known as Karnak causeway. So be fitting for it to be known as Karnak Bridge. Many of the people in the valley have had much to do with Karnak over the years, even before it was a playhouse.”

“The old causeway was locally referred to as Karnak Causeway, I would like to suggest keeping the name for the new bridge.”

“Little Falls Creek, which is located near the starting point of Devil’s Thumb (Manjal Jimalji) Track. I’d like to suggest Little Falls Creek as that is the name of the creek running under the bridge.”